Headed Back out to the Field – Transferred to Bauan! 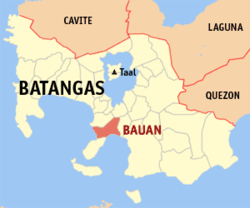 A Map of the City of Bauan in Batangas Province

After almost six months in the mission office serving as an Assistant to the President, Elder Burbidge has been transferred out into the mission field to the City of Bauan.  He is approximately 60 miles south of his brother, the “Other Elder Burbidge”!  The transfer was an experience that consisted of catching a Jeepney, then transferring to a bus, then back to another Jeepney before arriving in his new town.  His companion is Elder Samuel Leon, a new missionary from Sidney, Australia so Elder Burbidge will have the chance to train him up before he leaves in July!

Elder Burbidge was able to Skype with his family on Mother’s Day, and is excited to finish his mission strong over the next couple of months before returning home to Washington State!